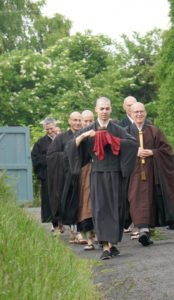 As every year, the Association Zen Kanshoji Belgium, which unites the four
dojos of Charleroi, Brussels, Leuven and Rixensart, organised a retreat in Braives May 19th – 21st, 2018.

Fourty people, including many new practitioners, coming from Belgium (of course), France but also the UK to participate.

The retreat was led by Taiun JP Faure, abbot of Kanshoji.

A full wing of a large farm had been rented for the occasion. Spring and sunshine met. In this rural setting, a beautiful harmony quickly settled and lasted throughout the three days. Due to the strong and undistracted practice of each
participant, the atmosphere became quite peaceful.

As on any zen retreat, the many zazen alternated with samu (work necessary for
the smooth running of the retreat), both inside and in the garden. 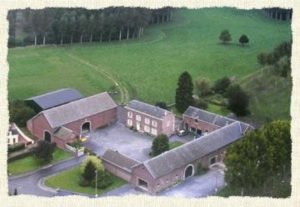 Certainly one of the essential aspects of the retreats in Belgium is the friendliness and the proximity with the teacher. The shosan and mondos allowed Taiun JP Faure to shed light on some profound aspects of zen practice in everyday life.

Want to join the discussion?
Feel free to contribute!

Getting ready for the Ojukai ceremonies

Returning to the source
Scroll to top