In souvenir of the ceremony of Shinsanshiki, during which Taiun Jean-Pierre Faure o 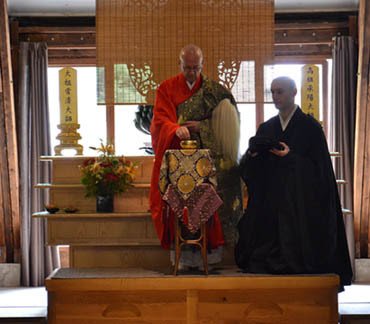 fficially took the position of abbot of the temple of La Gendronnière, here is master Deshimaru’s poem that he mentioned at that occasion.

Peace in the infinite universe…
Struggles in the finite world.
In this upside down world,
In this distressed civilisation,
The river perpetuates its flow, unchangingly
Since the dawn of time.

He keeps this position in the daily life at Kanshoji, until the following shuso, Ryugen Jean-François Vercauteren, takes over for the winter ango.

Ango is traditionally a training period for monks. At Kanshoji, it is also opened to bodhisattvas, and more particularly to people who have responsibilities in a dojo. This year, it will last two months : from the 15th of January until the 15th of March.

Meanwhile, a 10-day initiation to the ango is happening from the 3rd to the 11th of November.

Even if Taiun became the abbot of La Gendronnière, he remains the abbot of Kanshoji and the practice continues unchanged in our monastery ; you are all welcome to stay with us at any time.