(Excerpts from an interview with Taiun JP Faure in “Regards bouddhistes”, January 4th, 2016.

Regards bouddhistes: There is a preconceived idea about non-violence, inherited from the “peace and love” movement of the 70s, when hippies were experimenting with drugs and when non-violence meant “everybody’s nice and kind” in a sort of naive, childish bliss. What do you think? 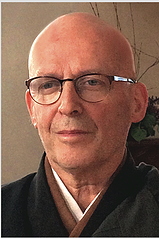 Taiun Jean-Pierre Faure: What I remember from the beatnik movement (I am 70 years old now) is that it was a pacifist movement. Relationships were supposed to be based on love and peace, peace leading to love, or love leading to peace. It was sometimes a bit “easy”, with the help of drugs or when it was no big deal to kiss or sleep with your neighbour.

Still, that movement came about because people saw that society was based on aggressive and greedy values and provided no answers to existential questions. They reacted by moving away from greed and aversion, but without being aware that “peace can be found deep within ourselves”, which is specifically Buddha’s message.

R.B.: To what extend are peace and non-violence a practice?

T.J.P.F.: That’s what Buddhist practice is all about! We all inherit our own specific karma at birth, whose three unwholesome energies, or three poisons, are ignorance, greed and aversion. Buddhist practice calls for awakening moment after moment. Awakening does not happen once and for all, except for someone like Shakyamuni Buddha who realised the complete and perfect awakening, settled and unsurpassable.

How does fear work? Is it a “by-product” of our attachments?

Attachments are attachments to delusions. Delusions are erroneous conceptions of reality. If I try to imagine what will happen ten years from now, I use my imagination. As I do so, with my limited intellectual and relative understanding, I can imagine that it will be very difficult. If I keep that in mind, it will become an obsession. And if I keep that obsession in mind, it will shut me up in a very distressing world.

All the time, I rewrite history, believing that my memories are a true reflection of the past, or I invent the future, thinking that my imagination is reliable. I interpret, I give meaning, and that constant mental activity can lead to erroneous conceptions linked to all kinds of fears.

How can we understand where conventional reality stops and ultimate reality begins?

In his teachings, Buddha always took both relative and absolute truths into account. In any given situation, if we don’t know how to move along with one foot in the relative world and the other in the absolute world, we don’t know how to walk on the Way. The Way is realising unity between relative vision and absolute vision. Human beings have a reflexive capacity; that is how they can see themselves and all things. But they must understand that those representations are relative visions, not the absolute one. The absolute cannot be grasped: we can only be in unity with it. As soon as we start using our reflexive capacity, we’re in the relative world.

Where are the individual and collective sources of violence?

Every time someone is overcome by anger, it’s because he doesn’t accept the situation, he doesn’t want to let go of his ideas and see reality, he doesn’t want to change his plans even if they are impossible to carry out. For instance, I decide to go on vacation, my car breaks down, my plans are compromised… I can be overwhelmed by anger. Anger comes from the fact that I don’t accept reality as it is, and that I’m a bit “psychorigid”. The source of all forms of violence is the “me” wanting to appropriate everything.

What about collective violence?

The collective is a collection of individualities. If we choose a political model such as democracy, with a voting system, we elect a leader to take care of our business and interests. In such a model, we listen to everybody’s points of view and we let the majority make choices for the collectivity. It’s the best system that we’ve found so far, despite its limits.

What should we do about ISIS?

J.P.T.F.: I’m not comfortable talking about that. A monk does not dwell in politics, but… From the moment when George Bush, Colin Powell and the British Prime Minister Tony Blair gave false testimonies to declare war on Irak, they opened Pandora’s box and a huge mess ensued.

From my point of view as a Buddhist monk, society’s problems must be addressed by the rule of law. A country governed by the rule of law asks that its citizens not exercise justice themselves; it sets up bodies such as a justice system, the police or an army to contain the troublemakers who cannot awaken in this life and who are dangerous for society… we cannot eliminate such individuals, even if they are dangerous.