Born in 1927 in Nagano Prefecture, son of the abbot of the Ryuto-in temple, he graduated from the Buddhist University of Komazawa, the great university of Japanese Buddhism. 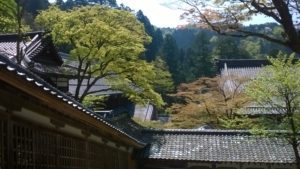 The temple of Eiheiji

He then entered the temple of Eiheiji for a period of training at the age of 22 and became abbot of Ryuto-in at the age of 25. He divides his life between Eiheiji, Ryuto-in and Tokyo, where he is a member of the Assembly of the Soto School, one of the leading schools of Japanese Buddhism.

In the 1970s, in Japan, he met Master Deshimaru who wanted to settle at the Sekkyuji temple in Nagano prefecture, and made it easier for him to access it.

As a representative of Soto Zen and Japanese Buddhism, he met Pope Paul VI in Rome in 1982. The same year, he accompanied Rev. Hatha Zenji, abbot of the temple of Eiheiji, to the temple of La Gendronnière. 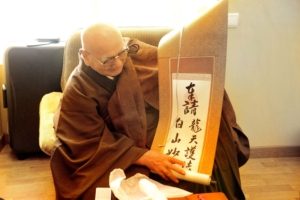 In Kanshoji, during the abbot’s induction in 2011

In 1992, he became Kannin (Grand Administrator) of Eiheiji. In 2004, he was appointed Abbot of the Chuôji Temple in Sapporo, one of the main temples of Japanese Buddhism in Hokkaido.

In 2001, he returned to La Gendronnière at the head of a large delegation from Eiheiji to celebrate the 750th anniversary of Master Dogen’s entry into Nirvana.

There he met Taiun Jean-Pierre Faure, at that time in charge of La Gendronnière, who became his disciple and helped him to found the Kanshoji Zen Buddhist monastery in the Dordogne (France).

In the days following the inauguration of the monastery in 2003, at Kanshoji he gave transmission of the Dharma to his first European disciple Taiun Faure, who became abbot in 2011. 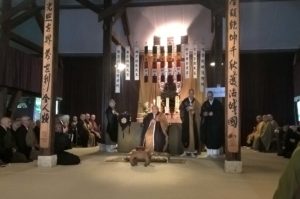 In 2008, he gave the transmission of the Dharma to Hosetsu Laure Scemama, his second European disciple, in charge of the Limoges Zen Center, who helped found Kanshoji, of which she is currently vice abbess.

In 2016, he presided over the great O-Jukai ceremonies at La Gendronnière temple, of which Taiun Faure Roshi was at the time abbot. This is the first time that Ojukai – one of the great ceremonies of Japanese Buddhism in the form of Soto Zen – has been held in Europe. He returned in June 2019 to preside over these same ceremonies in Kanshoji.

He returns to Europe almost every year. Over the years, strong links have been forged between Dônin Minamisawa Zenjiand European Zen.

Minamisawa Zenji has always had great respect for the mission that Taisen Deshimaru Roshi initiated in Europe and he strongly believes in the future of European Soto Zen. The link he has created with his European disciples, with the monastery of Kanshoji and the temple of La Gendronnière is growing stronger every year. He works with faith and diligence for the development of Zen in Europe.