The founding abbot of Kanshoji, officiating

Every Buddhist ceremony is practised in homage to the Buddha, to help all existences.

This is how we express our gratitude and give back to the universe the merits of our practice.

The ceremonies take part in the harmony of the assembly of the practitioners and are its expression.

The sutras sung during the morning ceremony are successively dedicated to the Buddha and to all existences, to the lineage of the patriarchs, to the founders of the monastery.

According to tradition, during the training retreat, additional ceremonies take place at noon and in the evening.

The Buddhist Ceremony of Repentance or New Departure:

Seeing one’s mistakes is a practice of Awakening; recognizing them is liberating.

To practice repentance is to face one’s responsibility as a human being. It is to free oneself from our illusions to enter the next situation with an open mind, available. From there, we can act in the world with wisdom and compassion.

In Buddhist repentance, there is no notion of guilt. Master Eno writes: “Guilt is a hindrance to Awakening.”

All the bad things I’ve done since ancient times,
born of my desires, my anger and my ignorance,
produced by my body, my mouth and my conscience,
all that bad karma that has no beginning,
I now recognise it and I repent of it.

These are the most beautiful Buddhist ceremonies. They pay homage to the major patriarchs of the Zen school – Buddha, Bodhidharma, Master Dogen, Master Keizan – and to the first founder of the temple.

On the occasion of the entry into Nirvana of the founder of our school, the original master Shakyamuni Buddha, we express our gratitude for his deep compassion.
We offer the merits of this ceremony so that the light of the Buddhist teachings may liberate human beings from suffering. 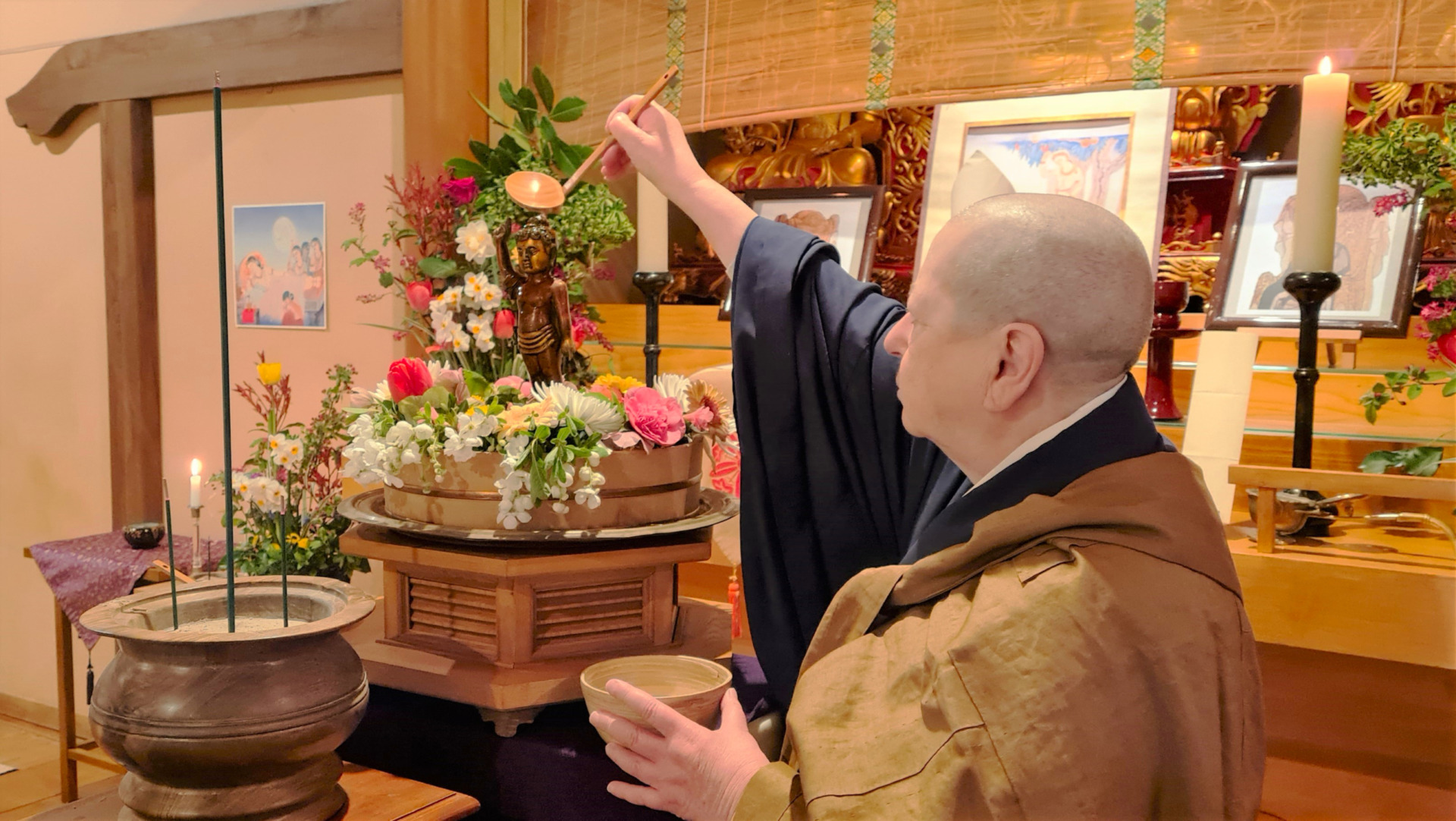 During this ceremony, we symbolically wash the newly born Buddha child, reminding us that Buddhist practice purifies our mind from the stain of illusions.


Master Taisen Deshimaru was the first master to introduce the practice of Zen in Europe. Without him, none of us Europeans would practice Zen Buddhism nowadays.
Every year, on April 30th, the date of his death, we express our gratitude to him.

Master Dôgen (13th century) and master Keizan (late 13th-early 14th century) are considered, along with Buddha Shakyamuni, to be the founders of the Sôtô Zen school. We pay homage to them during this majestic Buddhist ceremony.

Like the waves of the great ocean and the clouds of the vast sky,
their influence is reaching out to us.
May they, like the sun and the moon,
illuminate all of our school’s practice areas
and pass on their compassion to human beings.

Bodhidharma (in Japanese: Daruma) is the 28th patriarch of our school and the first Chinese patriarch.
His meeting with the Emperor of China remained famous: faced with the Emperor’s inability to understand the true Buddhist teaching, Bodhidharma sat facing the wall for nine years.

Sitting in zazen in silence, motionless, without intention, Shakyamuni Buddha returned to pure existence, pure of all confusion, of all greed, of all aversion: this is what we call Awakening.
This ceremony closes a week-long silent retreat where we renew the Buddha’s experience.

Soto Zen Buddhist monks are often called upon to pay a final homage to the deceased and thus help the loved ones to mourn. On this occasion, they recall the meaning of life and death.

(read article on ceremony in homage to Francis)


Ojukai is a major Buddhist ceremony. It is the first step on the Buddhist path for those who take part. 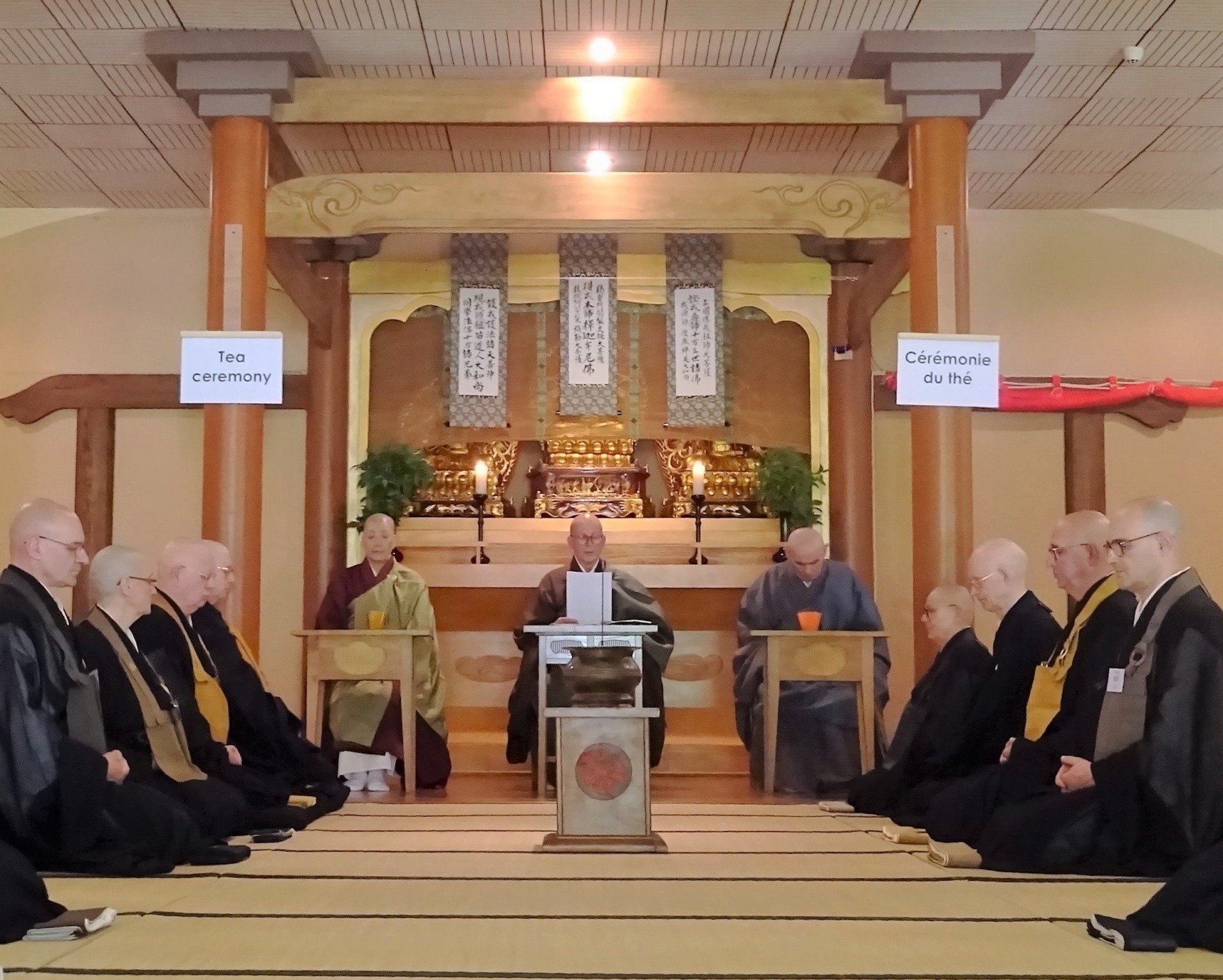 In the Soto Zen School, this event lasts from five to seven days.
Main aspects of this ceremony :

– Paying homage to the lineage of the patriarchs from Buddha to the present Master of Precepts.
– Taking refuge in the Three Treasures – Buddha, Dharma, Sangha.
– Repentance: Recognising the infinity of our small dysfunctions.
– Receiving the precepts.

This Buddhist ceremony has taken place for the first time in Kanshoji in June 2019.


Dedicated to any person suffering from a serious physical or mental illness, it aims to relieve their suffering and help them regain peace of mind.