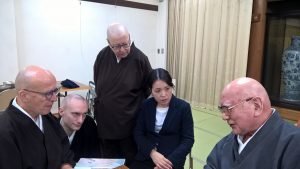 Last December, several of us visited the Chuoji monastery in Japan.

There we met the Venerable Dônin Minamisawa Roshi, founder of the monastery Kanshoji and supporter of the Ojukai project in Europe. We have started to work with his assistants to prepare the big Ojukai ceremonies, which will take place in Kanshoji June 2019. 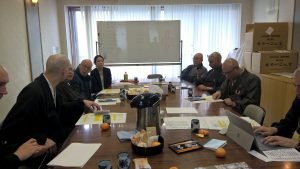 The Ojukai ceremonies were established during the 19th century, to permit laypeople to take refuge in the Three Treasure (Buddha, Dharma and Sangha ), even if they don’t practice zazen, and to receive the buddhist precepts. These ceremonies are held over the course of several days and touch, through their depth, the heart of those who participate. They give them the strength to bring the teachings of Buddha into their daily lives..

The impressive and sustained practice of the Buddhas
Scroll to top